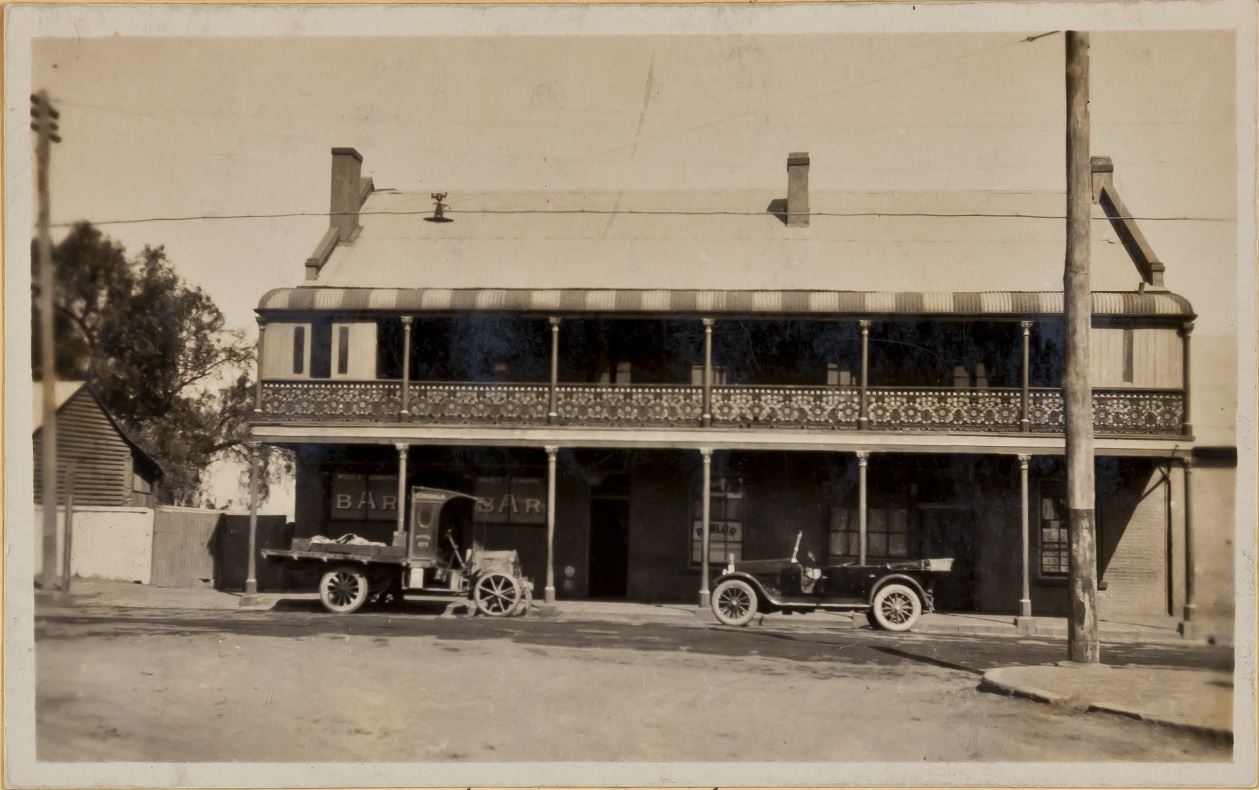 From Joseph’s death certificate, I obtained his exact date of death, as well as another clue as the cause of death was “Natural causes, accelerated by drink”; and his death was reported by the Wollombi publican. This was interesting as in his letter describing an earlier voyage to New York, he mentioned “.. but neither beer, wine or spirits I ever touched during the voyage either there or back nothing being tasted at the table but cold water – I never enjoyed better health in my life. I could have eaten anything I was always hungry and got very stout.”

This was before I had discovered Trove and online newspaper databases, so I headed off to the State Library of New South Wales in Sydney, and leaned how to use a microfiche reader…
I was able to find a report of his death from the Maitland Mercury from February 1864, which stated “… It appears the doctor had been ailing ever since his leap from the second story of the Sportsman’s Arms Inn, West Maitland, which some of your readers may recollect” 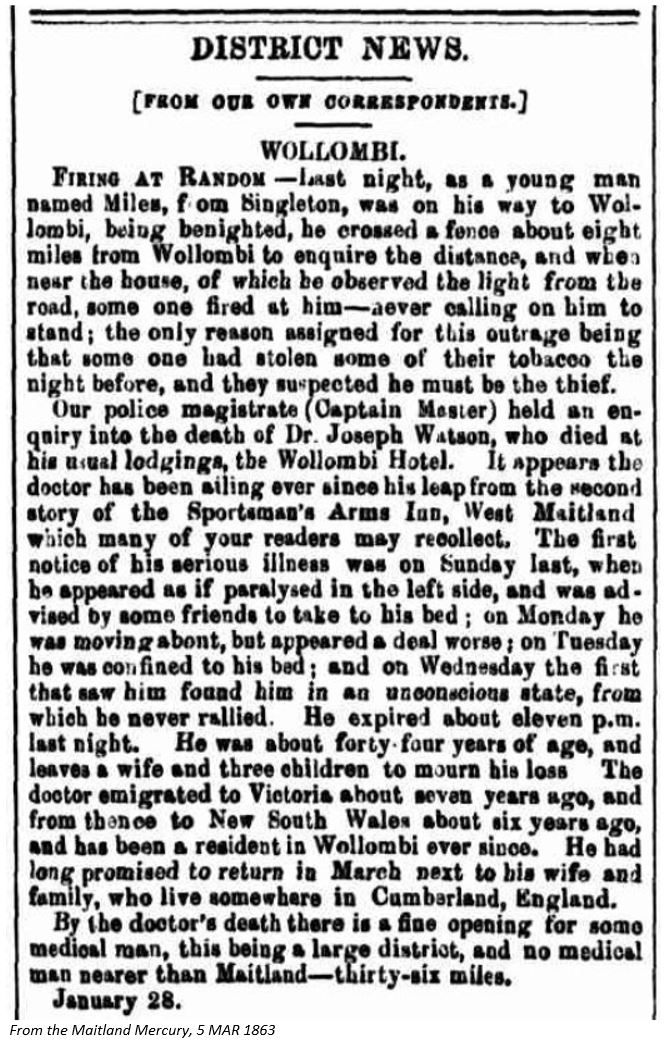 I needed to know more.
I was not able to find any reference to the earlier report at the time, but over the next few weeks I discovered Trove and other search tools, and was able to pick up the story…  The main photograph in this post if of the Sportsmans Arms Inn in 1924, but still showing the second storey that Joseph Watson would have fallen from. 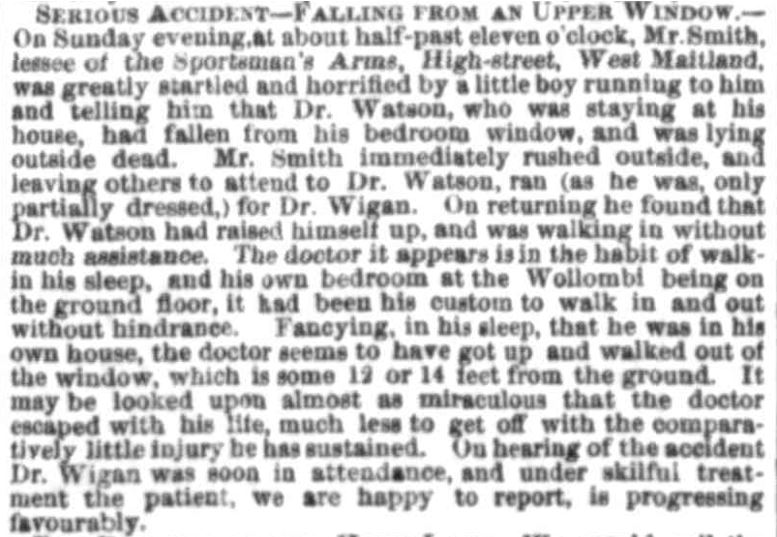 Eager to know more, I started researching his life as the local doctor in Wollombi in more detail. Were there any records or reports of his activities there?. Once again, a search of local newspapers produced a swathe of stories of his service as the local medical man, including reports of him attending to a firearms accident, a boy after being kicked by a cow, a scalded baby, a man injured by a falling tree, a diptheria and whooping cough outbreak as well as an investigation into a local rape.

In addition, I found a record of his being sent to prison in the Maitland Goal for one month between December 1860 and January 1861, before any other reports of his life in Wollombi. This report appeared to be consistent with what I already knew about Joseph … 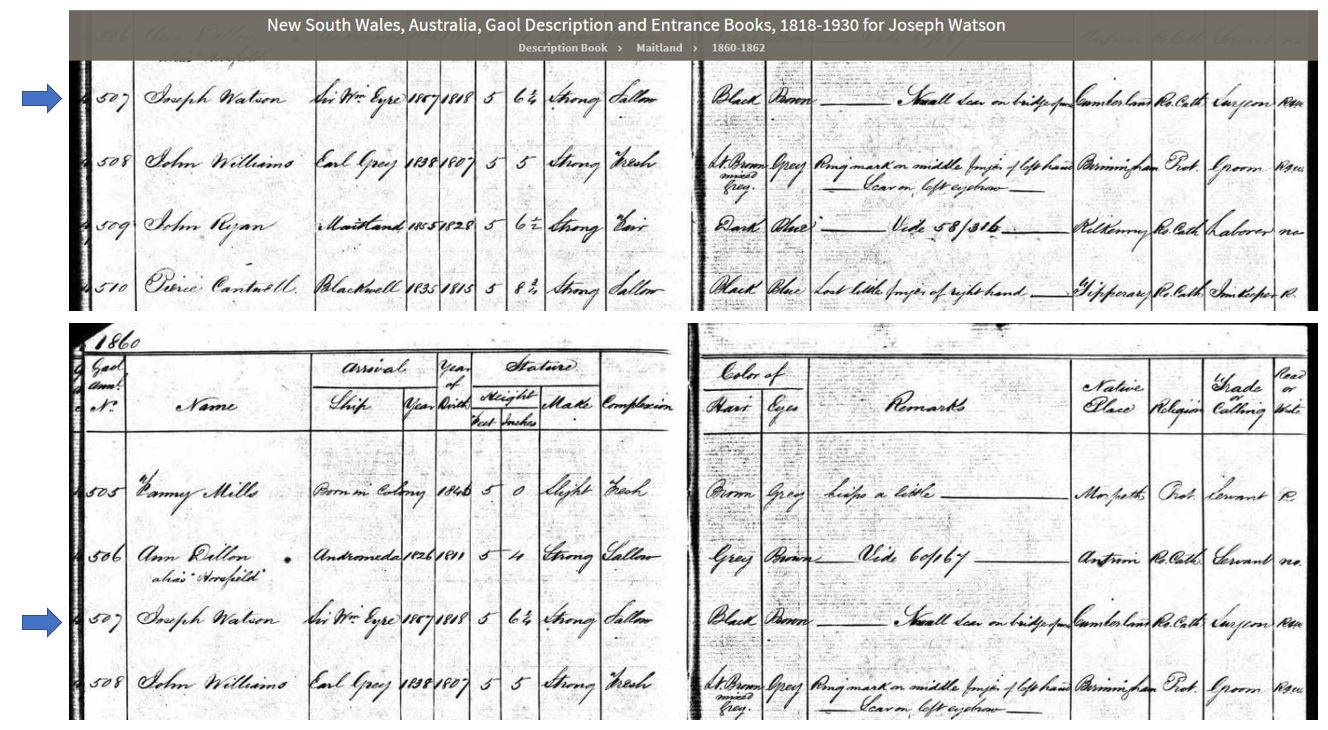 It gave details of his arrival in Australia in 1857, aboard the Sir William Eyre. I had no records of the ships’ name before this, but the dates and locations of arrival from shipping records corresponded with his letter to his wife when he arrived in Melbourne. It also stated that he was originally from Cumberland, was resident in Wollombi and was a Surgeon by trade, which was consistent with what I had already found out about him from other sources. This record also gave some additional descriptions – his height 5 foot 6 1/4; Strong stature, with a sallow complexion a and small scar on the bridge of his nose!
My next quest was to locate prison records from the Maitland Goal to find out what he was charged with.
After some searching through newspaper archives, I finally found what I was looking for – confirmation that this was indeed my very own Joseph Watson.
“Our police magistrate has prevailed in awarding to Joseph Watson a month’s imprisonment under the Petty Larcency Act for the theft of some spirits in a public house. Long the victim of the most inordinate career of drunkeness, this hapless individual had, through some morbid commiseration of the inhabitants, been permitted to follow out the practices of his medical profession in the district.” 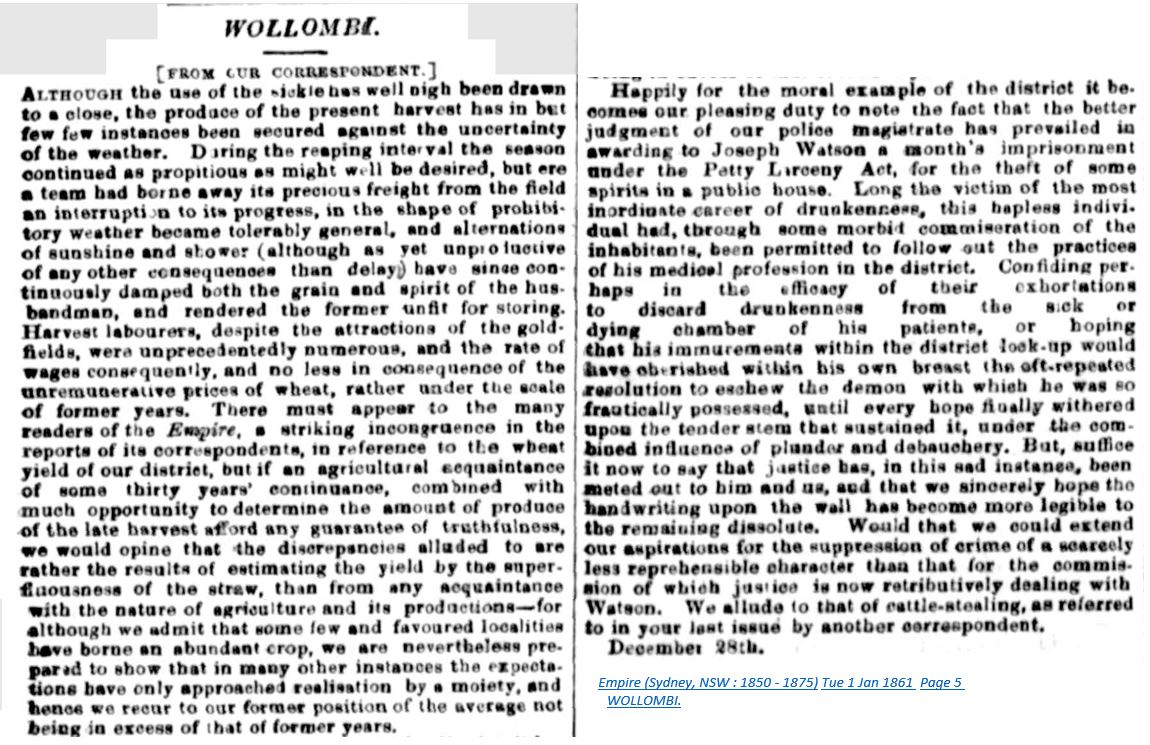 This seemed to have had its desired effect, as subsequent reports from Wollombi never mentioned his drinking problem again and were generally of a respected medical man serving the community in Wollombi.

1 thought on “Joseph Watson in Wollombi”